skip to main | skip to sidebar

State of the Schnauzer

I have terrible allergies to animals. I love them and can't resist petting them, but they make my nose run and my eyes itch if I don't wash my hands immediately. My brother is the same way to the nth degree. As kids, we both wanted a dog. We would shop for one by letting my brother play with them. If his eyes swelled to slits and he broke out into hives, that wasn't the one for us. This is how we ended up with Gabriel Penelope, a gray miniature schnauzer with a profound loyalty to her immediate family (my mom, dad, brother and me) and Gramma. (When Gramma was around, hamburgers and hotdogs rained down from the table. How could this not breed loyalty?) Gabby hated everyone that was not in her 'top five' list. She was especially offended by running, hugging, and deep voices. Gabby was how I knew I could live with a miniature schnauzer.
Many years later, after my husband and I had married and purchased a townhouse together, we decided we needed a dog to complete our family. My husband would have loved something large and full of energy. I knew what I wanted - a dog with whom I could live comfortably. We went to the pet store and found her - Babette. Inky black and a bit scruffy. She had a lovely white beard, chest and legs. She was so tiny she would stretch her entire body out with her paws above her head and her paws would just barely touch the back of my knee. She was adorable.
Her fatal flaw? She liked me better. So, the very next Saturday, we went out and got Gertie. 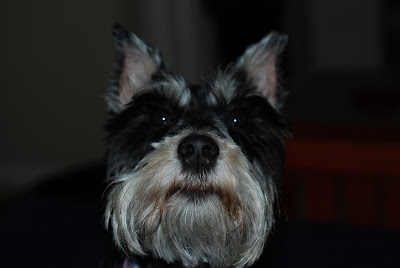 Gertie is a lovely salt-and-pepper schnauzer. She was skinny and athletic. While Babette was content to snooze wrapped around my neck, Gertie romped and played with Paul. When Paul would dare leave her and go to another room, Gertie would mourn him. She would howl with love and stand at the door from which he exited, willing him to come back with her mind. After a long, cold Illinois winter, we got them housetrained. All was well. We swung by the same store we had bought Babette 'just to look' while we got the girls' hair cut. 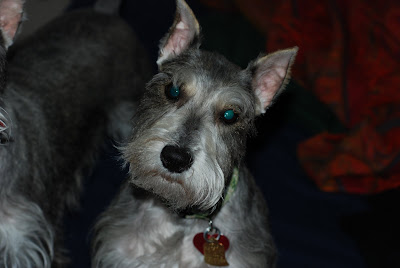 That's how we got Amos. Amos was impossible to housebreak. He figured out how to poop and pee under our futon, where there was barely room for him. He would stand on the back of the armchair on his hind legs and cry until a) he slipped off the back with a yelp or b) he got what he wanted - you to pick him up and hug him. He's not happy if you are ignoring him. As I am typing this, he is standing on his hind legs nudging my left hand with his nose and wiggling his tail hopefully. He was born with springs in his legs and is the most sensitive to your mood. 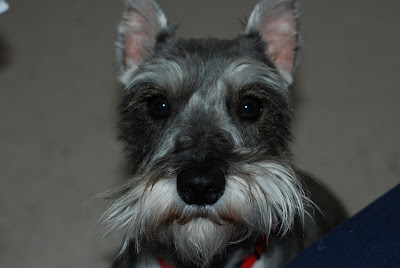 Those our our three dogs. They bring a lot messes into our life, but they bring even more joy.
Posted by The Maven at 5:06 PM No comments:

I'm writing this first post in a place where I hope to start over. To begin again. To do what I love.

I love writing and taking pictures. Somewhere along the way, I fell away from that. It's time to find my way again.

The Maven
I'm a recently married woman in my late 20's. We live in a townhouse that we love with three miniature schnauzers.